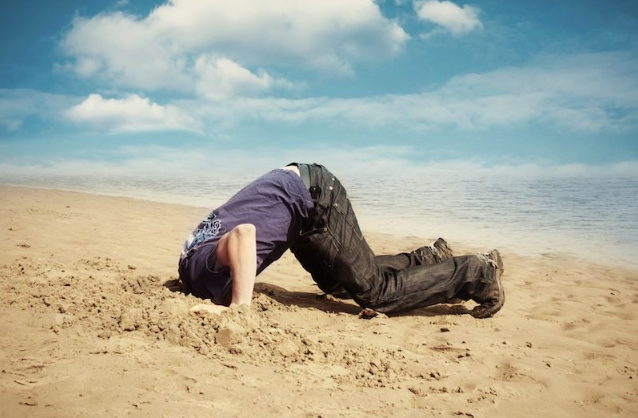 “Sticking your head in the sand, is not the answer!”

A perfect plan and life do not exist. Life comes with different problems and difficult exams. Putting your head in the sand like an ostrich is not the solution. Facing problems head-on and coming out on the other side is where real bravery lives.

There is a lot of fake news, propaganda, and lies about climate change that circulates around us every day. It’s a common observation that misinformation spreads far and wide and unfortunately like most wildfires. Solutions seem to fall behind in the media, unfortunately never getting as much of the press attention as the original story.

“Viral diseases are not as contagious as rumors going viral in the media.

Today, it is quite convenient to spread fake news. It can be done simply by sending a message, posting a tweet, or sharing it on Facebook. Fake news and propaganda can spread around the world in no time. Soon, it could be out of our reach to control. According to research conducted in 2019, 68% of adults in the United States believe that fake news impacts their confidence in many government institutions.

Every year more than 200,000 scientific research studies containing the word “climate” are published. There has never been as much information on this particular topic as there is today, but with this, comes disinformation and lies. People exposed to fake news about climate change generally have lower levels of belief and may believe it is out of their control.

What’s our role in sustainable development?

Remember that, there is no individual, philosophical, political, or religious system greater than facts and truth. Because the world system failed to protect the environment, does not mean that every one of us isn’t morally responsible to do every possible thing we can to make this planet a safer, cleaner, and habitable place. Every one of us is responsible for the suffering climate change created, and we are each a part of the solution.

Believe it or not, propaganda and fake news have corrupted the climate change debate. But what they cannot do is ignore the pollution and destruction fossil fuels have created. People know and can see those effects and are experiencing them everyday. It has directly affected their lives and their food supplies. Propaganda cannot claim that pollution is a historical cycle. We cannot deny the fact that a higher incidence of cancer has been reported in high-traffic areas.

We need to understand that this is a humanitarian debate and this is an opportunity for our collective survival. We must reduce our individual and collective carbon footprint as much as possible as well as educate one another about the benefits of renewables.

So, yes, we all need to keep working to get a zero carbon footprint. Everyone needs to make wiser, more sustainable, and greener choices. Each act is a drop in the ocean that makes it a little less polluted and the air a little fresher.

Fossil fuel pollution is damaging every living thing around us!